Blog
BlogAdvice & TipsWhy Does My Double Glazing Get Condensation On the Inside? 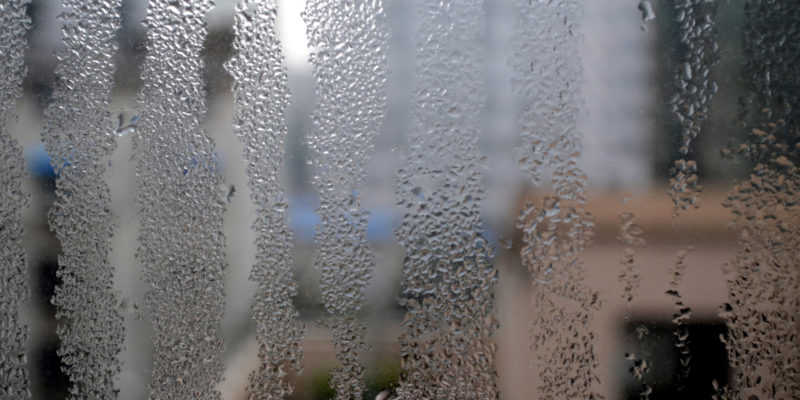 That said, condensation on windows is something we should try to reduce, since it can damage window frames. Plus, who wants wet window ledges? It’s also indicative of a bigger problem – excessive moisture in the home.

Condensation between double glazing panes is a different problem and indicates a broken seal that will need fixing or replacing – but we will discuss this further on. For now, let’s look at why you get condensation on the inside of a window in the first place.

Why do you get condensation on the inside of a window?

One of the main advantages of double glazing is its ability to prevent heat from moving from one side of the glass to the other. It does this by sandwiching a vacuum (or a layer of inert gas) between two sheets of glass. When heat energy builds on one side, it has trouble passing through this inner layer, and so instead is conducted back into the room.

This prevents heat escaping, and will reduce your energy bills, but in doing so it will create a considerable difference in heat from one side of the glass to the other. It’s this difference that creates the conditions for condensation.

Cold air contains less energy than warm air, and it’s less capable of keeping water vapour in its gaseous form. This means that the air inside your home will be damper than the air outside. When this air hits a cold surface, like a window, it will lose the energy necessary to hold onto the airborne water, and so that water will be deposited. Over time, this effect causes the build-up of water condensing on the glass, thus causing condensation on the inside of your windows.

In short, window condensation is warm moist air that turns back into water as soon as it hits a colder surface that it cannot pass through.

Where does condensation happen in the home?

You may notice more condensation happening in certain rooms of the house:

Cooking, showering, bathing and laundry all create substantial moisture which, unless you keep the rooms very well ventilated, will settle on the windows. This probably isn’t surprising. What is puzzling is why we get condensation on bedroom windows, since we’re probably not cooking or showering in there.

Why is there condensation on my bedroom windows?

During the day we move around the house but at night we’re confined to one small space for 8 hours or more, often with the door closed. The water vapour we lose through breathing over those 8 hours builds up as moisture in the air. As we tend to keep bedrooms a little cooler than the rest of the house and turn off heating overnight, the surface of the windows will be colder. The moisture in the air will condense into water as it hits the cool surface of the windows, creating condensation on the inside of your bedroom window.

With the temperature difference between outside and inside larger in winter, you often find more condensation on your windows during colder months.

Why is condensation bad?

Condensation can reduce the lifespan of a window, as it’ll encourage the growth of mould which can damage the frame. It can also be taken as evidence that the humidity inside your home is excessive – which can be a health concern.

How do you stop condensation on windows?

To prevent condensation settling on windows we need to take steps to reduce the amount of condensation in the home generally. Ideally, we want humidity levels to be at around 50%. In order to achieve this, you want to improve ventilation in your home – some steps you can take include the following:

How To Reduce Condensation In The Home

There are many steps you can take to stop condensation on your double glazed windows. Here are some ways to reduce condensation in the home:

When you’re taking steps to guard against excess humidity, you’ll want to consider the things that can contribute to it. One of the most obvious causes are the living beings which inhabit a house – each of which, be they humans, dogs, cats or guinea pigs, will emit water vapour over the course of the day. Paradoxically, you might also encounter an uptick in humidity when you return from a spell away – as an empty house will be unheated, and therefore prone to absorbing moisture, which will be released when the heat rises again.

Whilst condensation can be worse on single glazed windows (due to the internal surface of the window being much colder than the internal surface of a double glazed window), replacing single glazed windows with double glazing is not enough to eliminate the problem. The reason being is that although the inside of your new windows will be warmer, they will simultaneously eliminate draughts. This will reduce ventilation, and contribute to the build-up of moisture. What’s more, double glazing cannot remove the sources of water vapour inside the home, such as cooking or showering.

Acute causes of condensation on windows

If your condensation has appeared almost overnight, then you might be wondering what could possibly have caused it. There are several potential short-term contributing factors.

How Does Winter Cause Condensation?

When the weather outside gets cold, the chances of condensation occurring increase substantially. This is because the difference in temperature between inside and outside is greater, cooling your windows more and encouraging water vapour to condense on the glass. At the start of winter, it is therefore worth taking preventative steps to reduce preventable causes of double glazing condensation before they have a chance to develop.

Why Do New Windows Cause Condensation?

Newer double-glazed windows are able to do their job much more effectively than old ones, keeping an airtight seal between the indoors and out. Without ventilating airflow, don’t be surprised to see more condensation after getting your new windows installed.

Can Underfloor Heating Cause Condensation?

Radiators help warm air to rise and circulate, so if you’ve swapped out your radiators for underfloor heating, you might see an uptick in condensation on your windows.

What about condensation between double glazing panes?

So far, we’ve been talking about condensation on the inside of the glass – but what happens when vapour gets in between the window panes? This means that the window seal has sprung a leak, which has allowed water vapour to get in. The inert gases inside a modern double-glazed window contribute enormously to its ability to retain heat, so if yours is showing this symptom, it’s probably time to replace your windows.

For more information, take a look at our blog post on why condensation forms between window panes.

Looking for new windows for your home? Browse our JELD-WEN range, including sliding sash and casement windows. We also supply a variety of timber windows, aluminium windows and more. Just get in touch with our helpful team if you have any questions.