When it comes to windows, energy efficiency is super-important.  Any window which effectively excludes cold air, while slowing the release of heat into the outside world, will pay for itself in the long run.  On the other hand, a window which allows heat to bleed from your property will do the opposite – placing a drain on your hard-earned cash, and negating any short-term saving you might have made by opting for a cheaper window.

Clearly, there’s a cost-benefit analysis to be made.  All other things being equal, you’ll want a window which returns the best possible efficiency for the lowest possible cost.  But there’s a potential for difficulty, here: how are we to know which windows are the most efficient?  There are several different measures, but of these, perhaps the simplest to get your head around is the rating value.

What is the energy rating? 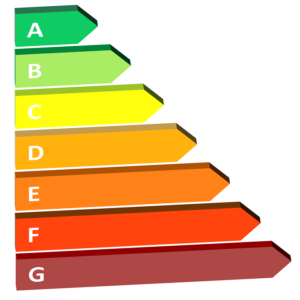 These colour-coded charts are a relatively recent development.  Window Energy Ratings, or WERs, first came to be in 2004 thanks to the British Fenestration Ratings Council, which was taken over by another organisation named the Glass and Glazing Federation, in 2006.  The scheme, since 2010, has also been administered by another company:  the thermal ratings register.

Unlike other measures of window efficiency, like the ‘u’, ‘l’, and ‘g’ values, WERs measure the effectiveness of the window as a whole, rather than an arbitrarily-defined part of it.  It examines several elements:

Your choice of window should take into account each of these factors, as well as the place you intend to install the window.  If you’re installing windows into a house in the UK, where sunlight comes from the south, then the ‘g’-value of a window will be less important on a north-facing window than it might be on a south-facing one – since the former isn’t going to receive any sunlight.

Ideally, you’ll want a window that’s as efficient as possible.  Modern double-glazing can achieve u-values in of just over 1.2W/m2K – and this is a good ballpark to aim for.  If you’re willing to install triple-glazing, then you might go even lower.  It’s worth noting that these figures only account of the raw performance of the window when it’s new – by maintaining your windows correctly, and drawing heavy curtains over them during night-time, even greater efficiencies can be obtained.