Windows come in a variety of styles, but two stand out as particularly popular.  One comes with hinges attached to the sides or top, allowing the user to open the window outward.  Another consists of one or more moveable panels, which can be slid over the top of one another to create a gap.  This latter sort is known as a sash window, and it’s what we’re going to talk about in this article.

How did sash windows first come to be?

It’s difficult to determine how the Sash window was invented, and by whom.  Some theories credit English designers; others credit Dutch ones.  The windows were first introduced into England in the late 17th century.  Their popularity would steadily build over the following two-hundred years, and by the Georgian period they were the window of choice for most homeowners.  By the time Victoria assumed the throne, they were the only sensible choice.

The hinged design of a casement window, which had previously dominated, was no match for the elegant economy of a sliding sash window, and so the latter would displace the former for several hundred years, until the development of modern materials and manufacturing methods would secure the comeback of the hinged design in the 20th century.  For this reason, period properties from the Georgian and Victorian era are often equipped with sash windows.

How does a sash window work? 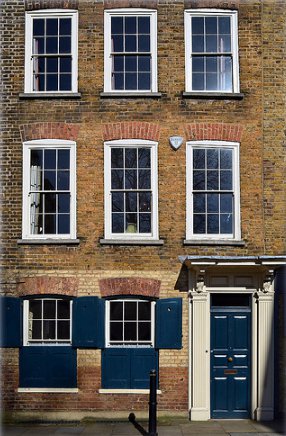 In a sash window, you’ll find two (and sometimes more) glass panels.  Slide one over the other, and an opening in the window will be created.  This sliding is usually vertical, but some sash windows open horizontally.

To facilitate opening and closing, sash windows are counterbalanced, usually with a weight that’s concealed inside the frame.  Through a system of hidden pulleys, the operation of the window can be made much easier.  Being entirely contained within the frame and shielded from the world around them, these pulleys rarely break – but when they do, fixing them usually requires disassembling or breaking apart the window frame.

A traditional sash window is comprised of several small panes (known as ‘lights’ or ‘muntins’).  These are joined by glazing bars to create the illusion of a single, larger window.  This design came about through necessity; in the early 19th century, the technology to create larger panels did not yet exist, and so sash windows offered homeowners a way to enjoy the advantages of a larger window without needing to contend with the drawbacks.  This design became so iconic that its use persisted even after the technology to create larger panels had become widespread.  Sash windows are traditionally comprised of two sets of six small panels, though other configurations are also possible.

What’s the difference between single and double-hung sash windows?

If you’ve been shopping for sash windows, then you might have run into the terms ‘double-hung’ and ‘single-hung’.  From a distance, the two sorts of sash window are indistinguishable from one another.  The difference lies in the fact that in a single-hung window, just one of the windows is movable; the other is permanently fixed into position.  By contrast, a double-hung sash window features two mobile panels.

Single-hung windows offer a few advantages over their double-hung counterparts.

To begin with, single-hung windows are cheaper.  With fewer moving parts to engineer and build, they can be designed and installed for a little bit less.  If you’re installing many windows, or just a few in positions where the advantages of a double-hung window aren’t significant, then these savings might be enough to tip the balance.

Many glaziers will tell you that single-hung windows are more energy-efficient.  This is because the topmost sash is fixed into the window, meaning it’s not susceptible to leaks in the same way as a mobile sash.  If the sash is fixed into place, you’ll be able to seal around the edges with caulk.

Finally, if you’re installing windows into an older property, then you may wish to install windows that are in keeping with the period.  Double-hung sash windows are a more recent innovation, and so may not match with Georgian surroundings.  With that said, it’ll be difficult to distinguish between the two from street level – and thus planning permission shouldn’t provide an obstacle.

Most windows you’ll encounter these days will be double-hung, as they offer several key benefits.

Perhaps the biggest advantage of a double-hung windows is that they’re easier to clean.  You won’t have to break out a ladder to reach the top panel; you can simply slide it down and give it a swift wipe.  If you’re cleaning a dozen or more especially tall windows, then this advantage will turn an hour-long chore into one that takes a matter of minutes.  If your double-hung windows are able to tilt in or out, then they can be cleaned from inside the house.  You won’t need to reach outside to do the cleaning, or employ a professional cleaner.

Another advantage of double-hung windows is their flexibility – you’ll be able to choose whether to open the top or the bottom of the window.  If there’s a bothersome draught entering through the bottom, then you can open the top for a more gradual cooling effect.  You might even open both partway and have two small openings at either end of the window.

So, should you choose sash windows?

Sash windows are an iconic innovation that can transform the way a property looks from the outside.  The design is just as effective as it was in the 1700s, and with the help of modern materials, it can fulfil its potential as never before!