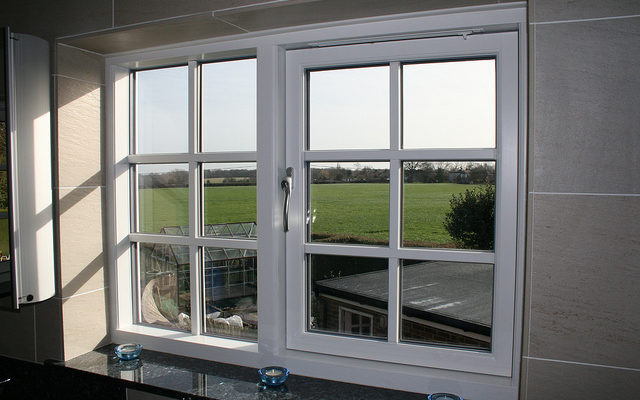 Traditionally, most windows were hung and opened using a side hinge or a sash. While these are still very popular, new technologies mean that modern windows come in several different varieties.  Let’s take a look at some of them.

Sash windows were especially popular during the Victorian era, so look great on homes from that period.  They consist of a single fixed panel, and one (or more) mobile ones.  These panels are slightly offset from one another, and are able to slide alongside one another in special grooves.  The classic format of a sash window is to have two panels in a vertical arrangement, each housing a three-by-two grid of rectangular panes.  Sash windows overwhelmingly tend to open from the bottom-up, but it is possible to install a sash window which opens sideways.

The major disadvantage of a sash window is that it’s impossible to open one entirely – you’ll instead fold half of the window behind the other half.  With the help of additional panels, you’ll be able to collapse the window even further – to a third or even a quarter of its normal size.  Such designs, however, are rare and difficult to implement.

A casement window (pictured above) is attached to its frame via a set of hinges which run along one side of the window.  They were among the first windows to be common in the UK, being popular before the spread of sash-based windows in the 19th century.  They’ve now returned to the front of the pack, so to speak, and are ubiquitous in new builds across the country.  Depending on their design, casement windows can be opened with a lever or a handle – which is normally positioned on the side or bottom of the window.  Casement windows invariably open outwards, so they’re unsuitable for spaces where there’s an object obstructing the path of the window. 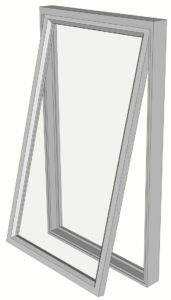 An awning window is functionally the same as a casement window, except that it opens from the bottom rather than the side.  They’re great for airing a room when it’s raining, since all the water will hit the sloping glass and drain away.  You’ll find this sort of window on many angled roofs, where drainage away from the aperture is essential.

A ‘hopper’ style window is another variety of casement window, whose hinge is at the bottom rather than the top.  They tend to be rarer, since it’s physically easier to open a window from the bottom as it tends to be more accessible.  Certain circumstances, however, might call for a hopper window – particularly in larger upstairs windows whose top is around head height.

A skylight is a window that goes into a ceiling.  In contrast with other sorts of roof windows, these tend to be out of reach; their purpose is to allow natural light in rather than providing a view.  Skylights are not designed to ever be opened.

While the sorts of windows we’ve discussed are tried-and-tested, it’s sometimes a good idea to try something a little bit different. A bespoke window of an unusual shape might be just the thing to add a little bit of visual interest to a property.  If you’re planning an extension, or just an extensive redesign of an existing part of your property, the right made-for-purpose window is sure to make an excellent visual centrepiece.