Blog
BlogGeneral InterestWhy Do Birds Fly into Windows (and how can you stop it?) 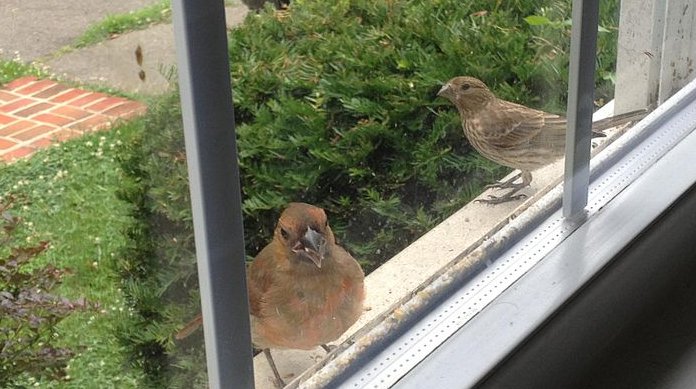 Many modern conveniences that benefit us are harmful to the animal kingdom, who can’t understand that roads are hazardous or anti-freeze is poisonous.  Windows are another common hazard – especially to birds.

Why do birds fly into windows?

There are three main causes of window collisions.  The first is probably the least harmful, and it comes about mostly during spring, thanks to territoriality.  A bird will perceive its own reflection as another bird, and attack.  Since birds rarely attack one another by simply ramming their rivals out of the sky, such attacks are unlikely to threaten the bird’s life.  They’ll simply be dazed and confused for a moment, before recovering and flying away.

The other two causes are more likely to result in serious harm, or even death.  During the day, a bird might spy a plant they quite like the look of in the window, or a reflection of one from the garden outside.  Flying towards it, they’ll smash into the glass.  Other collisions happen at night, when nocturnal birds will be drawn towards the light.  What draws them toward the light, however, is a matter of some debate.

How can we stop birds flying into windows?

Preventing birds from flying into a window is a simple matter of making that window seem impassable.  Placing opaque strips along the length of the window, so that a bird’s wingspan would be unable to squeeze through the gaps, will prevent most collisions.  Of course, placing masking tape, plastic strips, or other such things on the exterior of your window will alter the aesthetics of the building, so you’ll probably want to perform a risk assessment before proceeding.

Other options include mosquito screens, hung externally; tightly-strung netting that will literally cause birds to bounce away unharmed. Specially-manufactured anti-bird tape is another option. This will do the same job as masking tape , with less visual impact.

Drawing your curtains at night will naturally prevent nocturnal birds from being drawn in by the light in your home.  It’ll help keep your heating bills under control, too.  Finally, if you have a cat who can be persuaded to sit on the windowsill for large portions of the day, you might find that birds are dissuaded from coming near!